The Prayer of Hannah 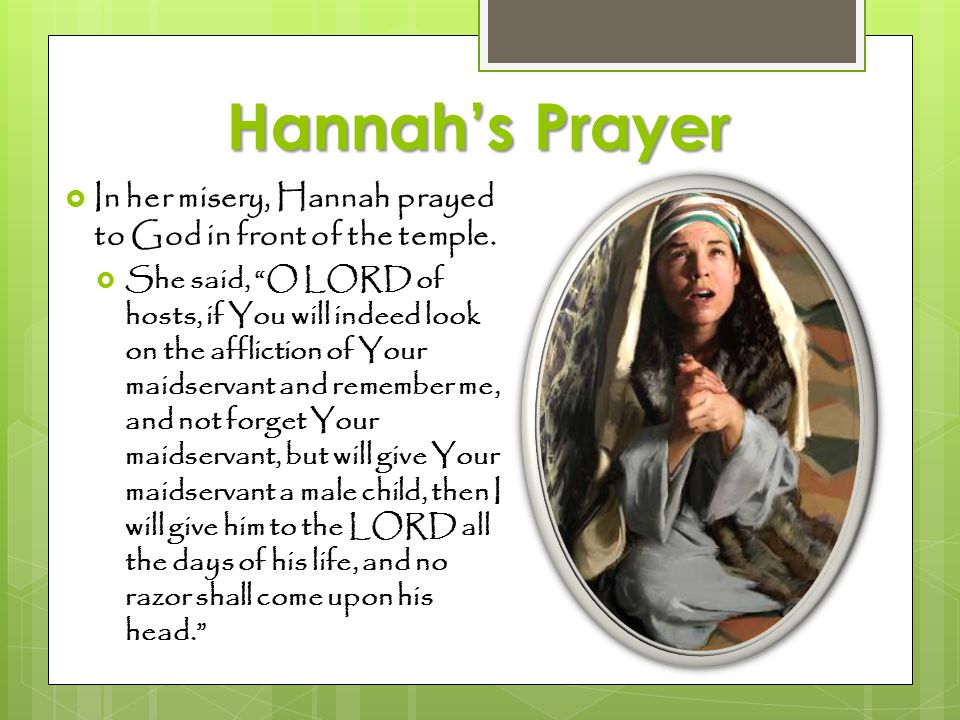 Prayer is communication between man and God. One of the ways your request, desire or expectation can be granted is through prayers.

The Bible says we should pray without ceasing. That is, we must pray in and out of season. The Word of God stated in James 5:16, ‘That the effectual and the fervent prayer of the righteous availed much’. That is, your prayer must have an impact and an effect. You need to pray with fervency and with effectiveness for your prayers to be answered. Living in a violent world calls for a violent way of praying and a much violent way of intercession in the place of prayer. God lends support to this premise when He said in His Word, ‘from the days of John the Baptist up to the present moment, the kingdom of Heaven suffered violence and it is only the violent that can take it by force’. Matthew 11:12

Manifesting as the sons and daughters of God call for a more violent and aggressive pattern of warfare in praying and in intercession as well. Beloved, possessing your possession, living a life of exploit and dominion, fulfilling your divine goal and potential, becoming unstoppable and untouchable, and destroying the works of darkness demand that your life is attracted to praying with fervency and consistency.

Watchman Nee was quoted as saying, ‘until we begin to bleed in the place of prayer, we can never be a blessing to others’. That was the reason Jesus went to Gethsemane to pray. The Bible recorded that the sweat which came out of His body was like blood and you will agree with me that there is no dispute as to the level of groaning and aggression that Jesus imputed into that prayer at Gethsemane. Permit me to inform you beloved, that it was not only on the cross that Jesus bled; He also bled while interceding for you because He is your intercessor.

Hannah got to a point in her life when she decided that change must happen. The desire for change is the catalyst for an open heaven and the next level. She got to a level where she believed her life as a barren woman must come to an end. The desire for a change is a signal to yoke breaking. It’s time to intercede!